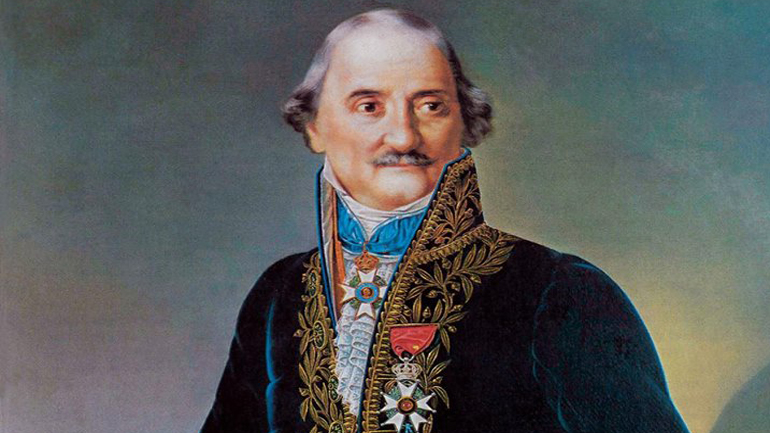 The beginning of the Greek War of Independence resulted in a number of land and naval victories. By the beginning of 1823, this led to the liberation of most of the Peloponnese, Attiki and Roumeli; although, there were significant reversals in Macedonia, Crete, Cyprus and the eastern Aegean. Gradually, towards the end of 1823, Greek revolutionary activity became fragmented. However, the Greeks continued to withstand the periodic but uncoordinated Ottoman Turkish attacks. This led them to hiring Albanian-Muslim mercenaries to fight the Greeks.

The First National Assembly was formed at Epidaurus on 20 November 1821. The Assembly drafted the first Greek Constitution and appointed the members of a Provisional Government including an executive and a legislative body, the Senate. The First National Assembly consisted almost exclusively of notables from the Peloponese. A delayed Second National Assembly was held in April 1823. The Senate in practice had little significance but was now led by the President, Ioannis Orlandos. Certain influential interests in the previous government and military leaders such as Theodoros Kolokotronis felt marginalized from the new Provisional Government. Furthermore, many distinct centres of power had developed in the Peloponnese. To appease them, the Senate proposed that Kolokotronis become a member of the Executive and Vice President of the Senate. Kolokotronis accepted but his supporters caused a serious rift when they prevented Mavrokordatos, who had been elected President of the Senate after the resignation of Orlandos, from assuming his position. There were now two opposing camps – those supporting the Executive and essentially Kolokotronis and those supporting the Senate.

Towards the end of 1823, Kolokotronis resigned from the Executive. Shortly after, the Senate removed key people from their posts sympathetic to Kolokotronis. In response, members of the old Executive, senators sympathetic to their cause and Kolokotronis and his supporters set up a rival government in Tripolis. In early April 1824, the forces of the new Executive under the leadership of Andreas Londos besieged Tripolis and Nauplion, which was held by Kolokotronis’s son. After one month of fighting an agreement was reached between Kolokotronis and Londos and his supporters. On 22 May, the first phase of the civil war officially ended; however, most members of the new Executive were displeased by the moderate terms of the agreement Londos had brokered. Despite the strengthening of the Senate and the new Executive’s position, and further buttressed by an English loan, a second civil war broke out in October 1824 triggered by resistance to tax levies. However, with assistance of military captains from Roumeli, the rebels was crushed and Kolokotronis and his supporters were imprisoned.

In the meantime, Dionysios Romas was eagerly following events from northern Italy. In the middle of 1824 he returned to Zakynthos and a short while later, just before the second civil war climaxed, formed the Zakynthos Committee with fellow Zakynthians, Panagiotis Stefanou and Konstantinos Dragonas. However, many members of the Filiki Etairia from Zakynthos were involved in the Committee. Their aim was to strengthen the Independence struggle via economic and political means often using their own fortunes. Freemasonry and the Filiki Etairia brought the three men into close cooperation.

Dionysios Romas was inaugurated in the Filiki Etaireia in April 1819; and shortly after, he turned his mansion in Zakynthos town into a meeting place of many Revolutionary chieftains and fighters who had found refuge on the island – including Kolokotronis. Together with Kolokotronis they met with the French General, Danzello, who helped them develop the plans of the Greek War of Independence. In 1820, the British military police controversially raided Roma’s mansion with the aim of finding secret patriotic documents. A lower ranking English Mason came to his defence, claiming the documents were Masonic and thus the British authorities ceased all action against him. Nevertheless, to avoid the British persecution and imprisonment, Dionysios Romas departed for Venice where he remained for four years.

In early 1825, Muhammad Ali of Egypt agreed with the Ottoman Turks to send his son Ibrahim Pasha to Greece. Ibrahim Pasha landed at Methoni on 24 February 1825, and a month later he was joined by his army of 10,000 infantry and 1,000 cavalry. The Greeks were taken by surprise. Ibrahim proceeded to defeat the Greek garrison on the small island of Sphacteria off the coast of Messenia. Ibrahim ravaged the Western Peloponnese and killed Papaflessas at the Battle of Maniaki. The Greeks were now in disarray. To stop the Egyptians they released Kolokotronis from captivity but he too was unsuccessful. By the end of June, Ibrahim had captured the city of Argos and was within striking distance of Nauplion. The city was saved by General Makriyannis and Dimitrios Ypsilantis. Ibrahim’s eventually left for Tripolis. At the same time, the Ottoman Turkish armies in Central Greece were besieging the city of Missolonghi for the third time.

The Zakynthos Committee was now working on improving supply to send munitions and food, including the chartering of boats often captained by Zakynthians, to Messolonghi and Navarino that were threatened by Ibrahim’s Egyptian forces. Extensive financial resources were provided by donors – including Dionysios Romas himself. The Zakynthos Committee also worked on improving the finances of the Revolutionary Government so as to protect the thousands of women and children refugees, aid in the release of captives and the further organization of volunteer fighters. They also managed spy links into Ibrahim’s camp. Perhaps most importantly, they applied to the English for support and protection, or, better known as the Act of Submission. The Deed was drafted by Dionysios Romas, Panagiotis Stefanou and Konstantinos Dragonas, with the cooperation with the high commissioner in Corfu, Frederic Adam.

By September 1825, the Act of Submission was presented to the ambassador to the Ottoman Empire, Stratford Canning in London. He initially rejected the Act as he did not believe Britain should change their neutral stance between the Greeks and the Ottoman Turks. However, the growing realisation that Russia was likely to continue to grow their influence in the Eastern Mediterranean if the British did not act, forced their hand.