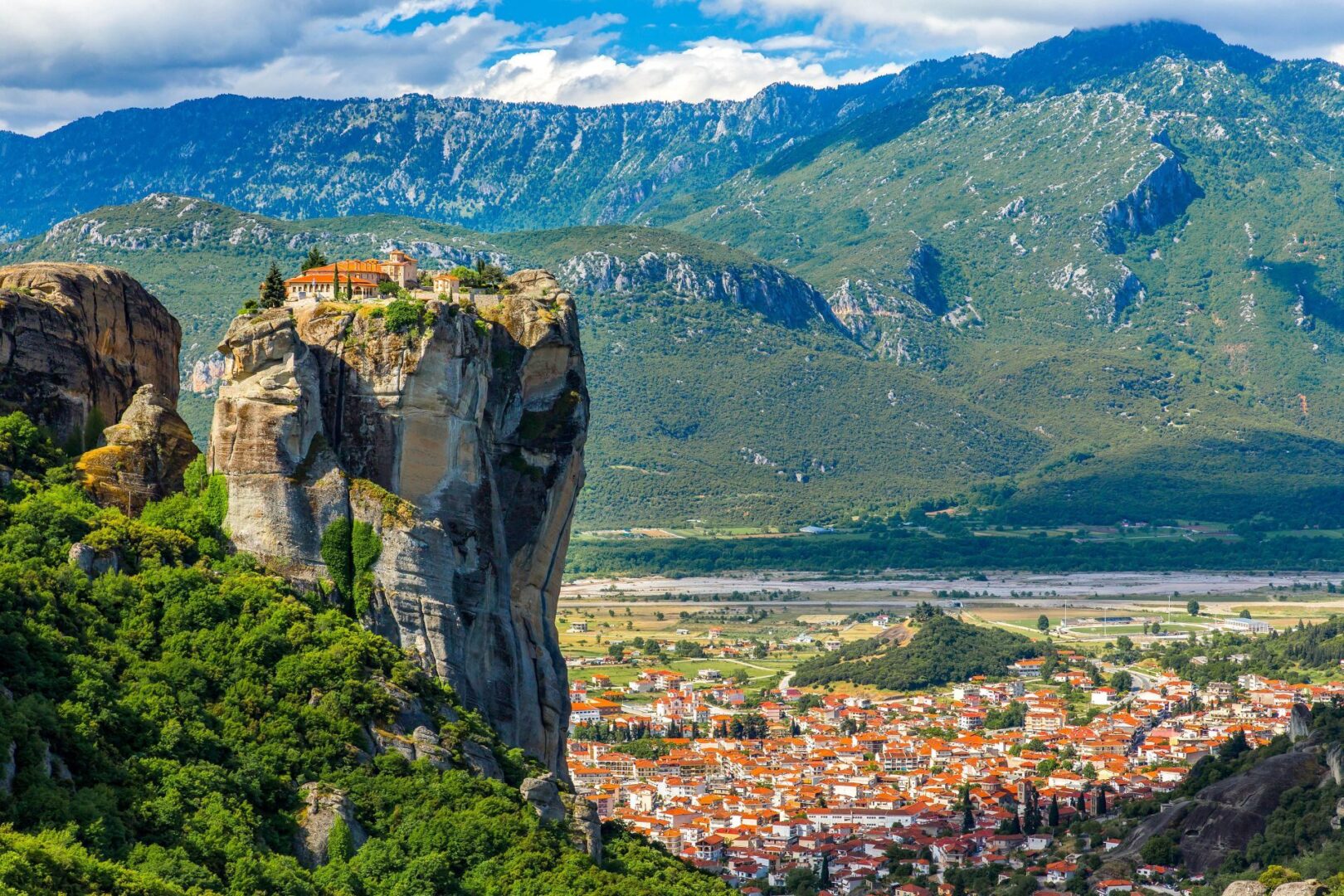 Greece has been divided traditionally into the following geographical regions:

The Attica region (Athens metropolitan area)
Almost half of the Greek population lives in the Attica basin (3,756,607 persons according to the 2001 census-provisional data). Athens , the capital of the country and its main administrative centre, is built in the Attica region.
Ministries, all the higher courts, the head offices of most banks, insurance companies, other businesses and a large part of Greek industry headquarters are concentrated in the capital area. Moreover, Athens attracts visitors from many parts of the world who are coming to visit the Acropolis, the city\’s and country\’s symbol, other archaeological sites and the National Archaeological Museum.

Sterea Hellas (excluding the capital area)
Delphi , the most famous oracle of Antiquity, lies in this region, at the heart of Greece. Running through central Greece is the rugged Pindos massif, with a peak of 2,637 m (Mt. Smolikas).

The Peloponnese
The Peloponnese is the southernmost part of continental Greece. Many great cities of the antiquity, such as Mycenae , Sparta and Olympia , the birthplace of the Olympic Games are located in this region. This fertile region enjoys a temperate climate, ideal for growing olivetrees and grapes.

Epirus
Epirus constitutes the north-western part of continental Greece and is bordered in the north by Albania and in the south by Central Greece. The region is almost entirely mountainous and the high Pindos massif forms the region\’s eastern boundary separating it from Macedonia and Thessaly. The main pole of attraction is in the northern part of the region, named Vikos National Park , which contains waterfalls, gorges, rivers, picturesque villages and dense forests.

Thessaly
Thessaly lies in the middle-upper part of continental Greece. The island complex of the Northern Sporades is included in the area. The plain of Thessaly, surrounded by several mountains, the most famous of which is Mount Olympus , the highest mountain in Greece (2,917 m.), is its main geographical feature.

Macedonia
Macedonia is the largest of the ten geographical regions of Greece. The region is bordered in the south by the Aegean Sea and by Thessaly, in the east by western Thrace, in the west by Epirus and in the north by Bulgaria, Albania and the Former Yugoslav Republic of Macedonia (FYROM). It contains the self-governing, monastic area of Mount Athos and Thessaloniki , the northern “co-capital” of Greece. The landscape is quite varied, since Western and Eastern Macedonia are, in general, mountainous with the exception of certain sizeable, fertile valleys. Central Macedonia contains the plain of Thessaloniki, the second largest in the country.

Thrace
This region constitutes the north-eastern part of continental Greece. It is distinguished from Macedonia to the west by the river Nestos , from Turkey (Eastern Thrace) to the east and north-west by the river Evros , from Bulgaria to the north by the mountain range Rodopi and in the south by the sea. The climate can be characterised as intermediate in the type between the Mediterranean and the Mid-European. The Evros delta, where many rare species find refuge due to the favourable ecology conditions, is the main pole of attraction of the area.

The Aegean islands
The Archipelago of the Aegean is made up by hundreds of islands and islets. All the islands are mountainous or hilly and they enjoy a warm climate. Concerning the rainfall, the climate of the region is the driest in Greece, with the islands of the eastern Aegean and the Dodecanese being the most humid.

Crete
Crete is the largest Greek island. As for the landscape, the island lacks any noteworthy plains, essentially mountainous. It is worth noting that the southern shoreline of Crete is the warmest area in Greece.

The Ionian Islands
This region forms the smallest geographical area in Greece and consists of seven main islands, which are strung along the west coast of Greece. The islands have a mild and relatively humid climate and the rainfall rate is considerably high. As a result, the vegetation is abundant and combines elements of the tropical flora with forests reminiscent of North Europe. The islands retain significant influences from Mediterranean Europe.