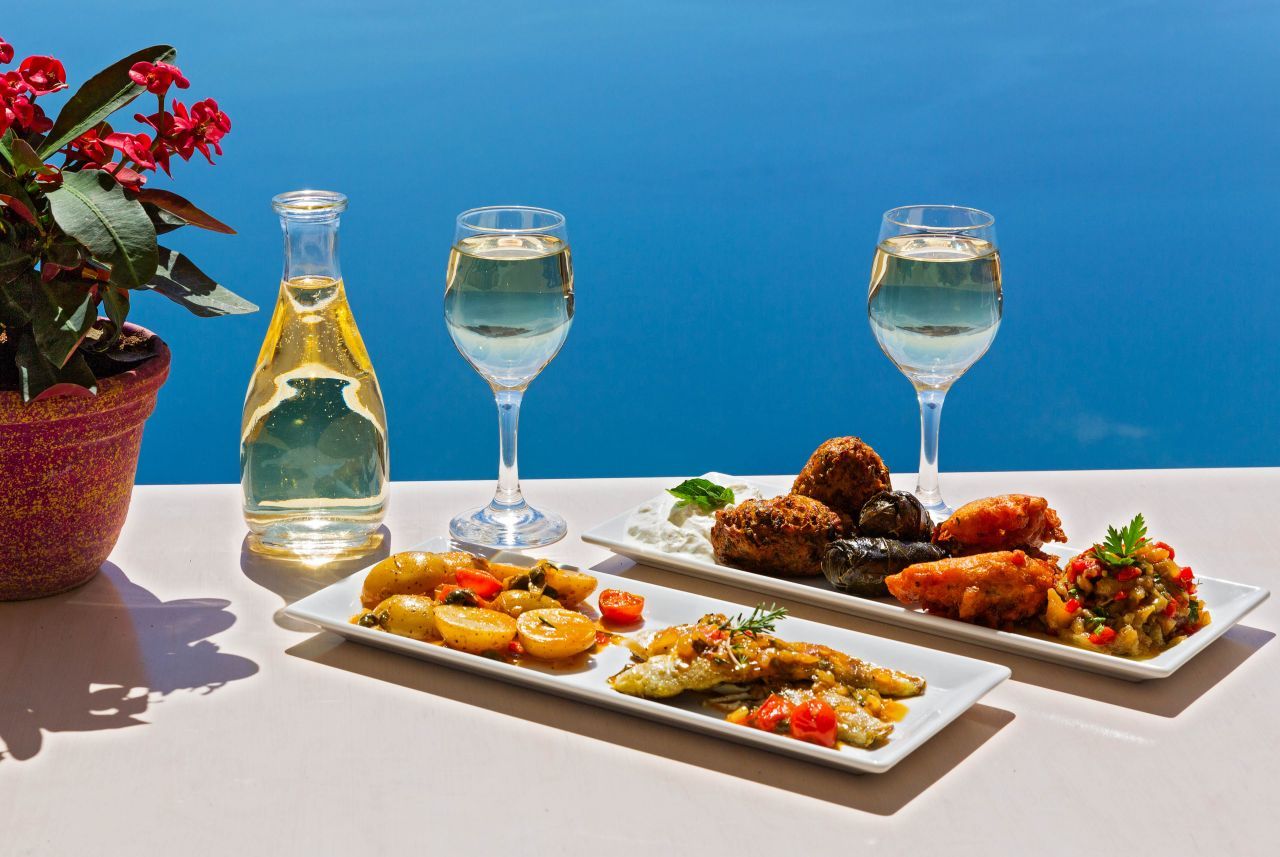 The unique tastes of Greece guarantee that you are in for many culinary surprises during your stay in the country. Contrary to common belief, you will discover that Greek cuisine is not only moussaka, souvlaki and choriatiki salata, but has a wide variety of dishes that can meet the culinary demands of both meat-eaters and vegetarians in an extremely satisfying way.

Things could not be different, anyway, in the country that gave birth to symposiums and the Epicurean philosophers. It was, in fact, Archestratos who, in 330 B.C., wrote the first cookbook in History, and reminded us that cuisine is a sign of civilisation.

Greece has a culinary tradition of approximately 4,000 years. Nevertheless, like most national cuisines, Greek cuisine has both influenced others and embraced ideas from its eastern and western neighbours.

Dining & EntertainmentGeneral Info
Greeks in all walks of life use evening dining as a principal source of entertainment. They dine late and enjoy open-air places during the warm summer months even if air-conditioning is available. In most establishments that cater to Greek clientele, service is likely to be friendly, warm and informal. Formality is found in deluxe restaurants only.

A meal in Greece is highlighted with a selection of hot and cold hors d’oeuvres (referred to as mezedes), which are served in small plates placed family style in the center of the table. Greeks love hearty soups that are meals in themselves.

Mezedes are comprised of such items as melitzanosalata (mashed eggplant with oil, lemon and garlic), taramosalata (Greek caviar spread), dolmadakia (meat or rice rolled in grapevine leaves), kalamarakia (deep fried squid), tyropitakia (cheese wrapped in strudel leaves), kolokithakia (deep fried zucchini) usually served with tsatsiki (cucumber, yogurt and garlic spread), keftedes (meatballs), stuffed peppers and tomatoes, pickled octopus and more.
The main course is a casserole or grilled meat or fish. There are also many delectable meat stews to choose from, as well as plain grilled cuts of meat and of course the well-known charcoal grilled lamb or pork called souvlaki. Fish and shellfish are excellent when caught, cooked and eaten the same day.

Salad is usually ordered with the main course and can be prepared with fresh vegetables or cooked dandelions (greens are boiled in water, drained and served with oil and lemon). Horiatiki, the usual Greek salad, consists of tomato slices, cucumber slices, olives and feta cheese dressed with oil and vinegar. All seasonal vegetables, such as artichokes, beans, peas, carrots, and zucchini are often cooked and served together in the casserole dishes rather than separately.

Greece produces a variety of cheeses, including some very interesting regional specialties. But the most commonly offered in restaurants are feta (white semi-soft and salted), kasseri (yellow semi-soft), graviera (hard) and manouri (unsalted, creamy and fattening).

Desserts are a delectable treat, including baklava (consisting of strudel leaves and walnuts) and kataifi (which consists of nuts wrapped in shredded wheat with a honey syrup).

In the summer, however, sweets give way to fresh fruit such as large peaches, melon, watermelon, grapes and pears.

Greek coffee is a variation of the coffee offered in many southeasten Mediterranean countries. The important words to know when ordering are pikro (bitter) metrio (semi-sweet), and gliko (sweet). Coffee is usually served with a glass of water.

Lunch is served between noon and 3 p. m.; dinner after 8 p.m. There is a wide variety of eating establishments in Greece, usually characterized by certain well-defined features:

Estiatorion (restaurant): A conventional eating establishment offering international cuisine and some Greek specialties. They tend to be in the upper price range.

Taverna: An offshoot of the traditional countryside-eating place. The owner and family members can often be seen preparing meals and serving food. A taverna places a great deal of emphasis on the mezedes and traditional cooking. The upper price range tavernas can be very sophisticated establishments in food, service and decor even though they rarely are as expensive as the deluxe restaurants.

Psistaria: A barbecue-style eating place with a large spit conspicuously in the entrance. Here one can inspect the roast pork, lamb and chicken. Your selection is priced according to the weight. Salad, french fries and cheese compliment such a meal.

Bouzouki: Bouzouki is the most popular entertainment for the great majority of Greeks. Bouzouki music is similar to American Blues, with many adaptations and intensities. The analogy is not accidental either. Bouzouki, like the Blues, emerged from a subculture of unemployed city dwellers persecuted by the authorities and treated as outcasts by the more prominent middle class. Their refuge was born from the small dens and coffee houses they created in the less desirable areas of the city. They found consolation in the music they created, which reflected the hard times and their experiences in pain and pleasure, in love and friendship. But the music composed by the traditional string instrument had a unique quality and pathos, as related to the Blues era. It was later adapted and patronized by the wealthy class and in time underwent many changes to emerge as the typical Greek music of today. Bouzoukia nightclubs are the places where one can break plates when spirits reach a certain pitch, or throw carnations at favorite performers, as the custom has evolved today.

Psarotaverna (fish taverna): They specialize in fish and seafood and are almost always found by the seaside or harborside. In a psarotaverna, one will find fresh fare of the day, usually the owners\\\’ morning catch.

Pricing and Tipping
In Greece, the bill already includes a 15% service charge. If service has not been included, follow the custom of your own country. Waiters, for instance, will expect from 12% at most restaurants up to 20% (before taxes) at a deluxe evening night spot.