The most significant Mycenaean site in Zakynthos can be found near the village of Kambi on the west side of the island. Mycenaean civilization was the first known Greek civilisation and the latter part of the Bronze Age in Greece and Asia Minor which spanned the period from around 1600 to 1100 BC. Zakynthos witnessed the earliest Mycenaean settlement in the Ionian Islands, probably at Kalogeros (near Gerakas beach) around the middle to late 1400 BC with houses and pottery excavated at this site.

One of the plundered Mycenaean graves found near the village of Kambi. Photo from the Ephorate of Antiquities of Zakynthos.
The site at Kambi was excavated in two phases over 1971-1972 and contains 14 rectangular graves carved in limestone. Unfortunately, only two of the graves were not plundered and only another three were partially plundered. Despite this, locally made pottery, a bronze knife and other items have been discovered. The graves are dated to 1400 BC -1190 BC and are probably family graves as they were reused many times. The bodies in these graves were usually placed in a supine position with slightly bent legs. The design of the graves suggests an element of Zakynthian provincialism as the differ slightly from many graves found elsewhere in the Mycenaean world. Typically, Mycenaean cemeteries were a short distance from settlements; however, the settlement of which the graves must have belonged has not been identified. 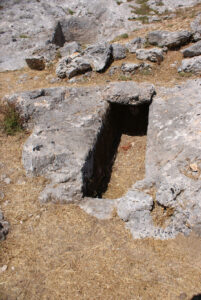 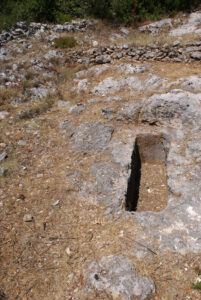 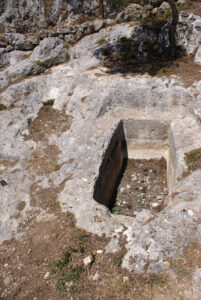 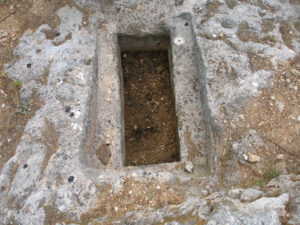 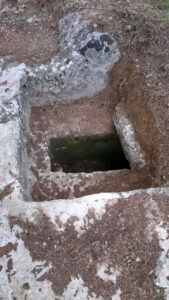 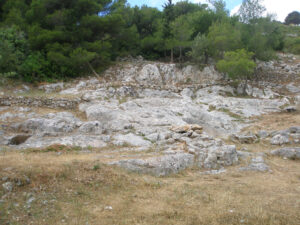 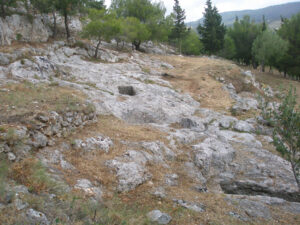 The drive from Zakynthos Town takes a little more than 50 minutes and is reached by turning left, just before Exo Chora when travelling from the villages of Agios Leon, and driving just past the village of Kambi. The site is specifically located on the east hill of the slope Vigla. There is clear signage marking the area.