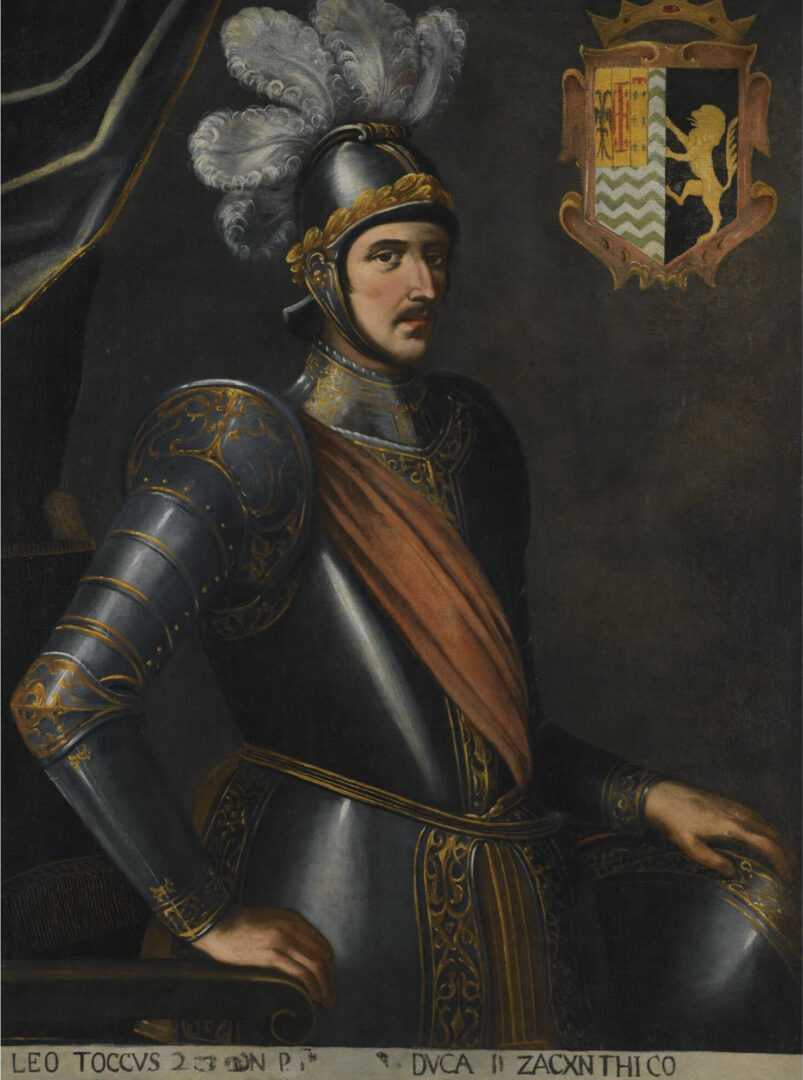 During the reign of the Ottoman Turkish sultan Mehmet II, the Tocco family had been obliged to pay a tribute to the Sublime Porte to preserve their sovereignty. They were required to pay an annual tribute of 4000 ducats to the Sultan and to pay 500 ducats every time that an Ottoman Turkish sancak beyi or provincial governor visited Arta. Of course, Leonardo III Tocco was also bound by the treaty.

Around this time, Zakynthos had some 25,000 inhabitants bringing Leonardo III Tocco’s state more than 12,000 ducats a year, according to the Spanish historian G. Curita.

Conditions for the local Greek Orthodox population were also improving – it is said that Leonardo III Tocco was more friendly to the Orthodox Church than his predecessors. He was also sufficiently Hellenised to use Greek in his documents. Even though he made these concessions, evidence suggests he was regarded as a tyrant by the islanders. The Ionian Islands under Leonardo III Tocco’s reign had also been the refuge of thousands escaping mainland Greece. Most prominently a few agreements negotiated between Venice and the County palatinate of Cephallonia and Zakynthos since the early 1460s – borne by Leonardo III Tocco’s increasing military vulnerability in the face of the Ottoman Turkish threat. It also appeared that Zakynthos was by now acting as a staging point for Stradiotes in the service of Venice for their wars on the Italian and Greek mainland.

In early 1479, the new sancak beyi of Ioannina passed through Arta. This official was not only 16 years of age, and he had been recently demoted by the Sultan but he was also related to Leanardo III Tocco – likely his cousin by being the bastard son of Leanardo’s uncle, Carlo I who had gone over to the Ottoman Turks. In response to this insult, instead of handing over 500 ducats, Leonardo III Tocco presented a basket of cherries to him. Furious, the Bey reported the incident to the Porte in Constantinople.

Based on old grudges and for a chance to conquer some of the last Christian states in Greece; and perhaps to create a staging platform for an invasion of Italy, the complaint was taken as a pretext for war by the Sultan against Leonardo III Tocco. The Bey also reported to the Porte that during the recent First Venetian-Ottoman Turkish war (1463–1479), Leonardo III Tocco had provided stradiotes under the pay of Venice refuge on Zakynthos which helped them to continue their raids on the adjacent Ottoman-occupied Peloponesian territory.

Therefore, in the summer of 1479, the Sultan ordered the Bey of Valona, celebrated captain and former Grand Vizier, Gedik Ahmed Pasha, to attack Leonardo III Tocco with 29 ships. In early 1479, Gedik Ahmed Pasha had concluded the siege of Scutari resulting in the cessation of that territory to the Ottoman Empire. Leonardo III Tocco did not wait the for Turkish invasion. He knew that the Venetians were unwilling, and the Neapolitans were incapable, to provide military assistance, and that his own subjects considered him tyrannical. Consequently, long before the Gedik Ahmed Pasha appeared, he collected all his portable valuables and fled from Lefkada to the strongest of his castles, Fort St George in Cephalonia. However, he did not trust the garrison stationed there. Also, the approaching Ottoman Turks noticed his ship was laden with treasure, so he hastily embarked along with his wife, his son Carlo, and his two brothers on board another Venetian vessel that lay in the harbour across the Ionian Sea to Taranto. Thereafter, he proceeded to Naples.

In the meantime, Gedik Ahmed Pash was being watched by the Venetian admiral, Antonio Loredan as he sailed down the strait between Corfu and the Greek mainland. But the Venetian admiral did not dare to disturb Gedik Ahmed Pasha in fear of stoking the continuation of the recently concluded First Venetian-Ottoman Turkish war. The Bay of Valona easily captured Vonitza, the last vestige of the old Despotate of Epiros and the islands of Lefkada, Cephalonia, and Ithaca from mid to late August 1479. He slaughtered the officials who worked for Leonardo III Tocco, burned the Fort of St George of Cephalonia and carried off many islanders to Constantinople to be sold into slavery. The destruction was so severe that Ithaca remained uninhabited until the beginning of the next century.

Detail from Meeting of the Betrothed Couple and the Departure of the Pilgrims by Vittore Carpaccio, 1495. Andrea Loredan is seated on the right.

Gedik Ahmed Pasha then proceeded to attack Zakynthos. However, this time he was met by Antonion Loredan. The admiral protested that the island was inhabited by Venetian subjects from the Peloponese and the Ottoman Turkish forces should cease their advances on the island. They then astutely hoisted, undoubtedly with the support of the local autochnones population, the lion-banner of St Mark on the Castle.

The defenders of the island were also protected by 500 stradiotes under the leadership of Stradioti Petros Bouas. He and his company of stradiotes were well known for fighting against the Ottoman Turks in the Peloponese for many years. They were probably in Zakynthos following another agreement with the Venetian Republic. Petros Bouas was also supported by Nikolaos Bochalis and Petros Bozikis and their own companies of stradiotes who arrived over last few years to the island from the Peloppnese and Napflion. Petros Bozikis was Nikolaos Bochalis’s first lieutenant. Subsequently, the matter was referred to the Porte in Constantinople.

However, the forces of Gedik Ahmed Pasha did not wait for the reply and attacked the islanders of Zakynthos. Although they would have been outnumbered, the stradiotes and the local inhabitants managed to defeat the marauding Ottoman Turks twice in battle around the Castle and Aigialo (the town below the Castle). They also helped to capture and release hostages the Ottoman Turks had taken previously. The stradiotes again attacked and even took the equipment that was to be used to break the walls of the Castle. Gedik Ahmed Pasha retaliated by attacking any ship near the island and continued small scale raids in the countryside of Zakynthos which was less well defended than the Castle and Aigialo.

Finally, a decision came from Constantinople. The Porte decided Zakynthos would become a possession of the Ottoman Empire but those Zakynthians who chose too could leave before the Ottoman Turks pillaged and occupied the island. Consequently, thousands of Venetian subjects and autochnonous Zakhynthians duly left the island with the assistance of Antonio Loredan’s ships. Most of them were transported to Napfaktos, Corfu and the Peloponese.

The Ottoman Turks slipped 500 soldiers onto the island to capture the Zakynthians before they could leave. Howwever, a group of 20 stradiotes noticed them around Bochali, adjacent to the Castle. Once notified the rest of the stradiotes and almost certainly local inhabitants surrounded these Ottoman Turkish soldiers slaughtered them all. Thus, due to the bravery of the stradiotes and local inhabitants the evacuation of most of the population was successfully completed and the Zakynthian people were spared the devastation wrought on Lefkada and to a lesser extent Cephallonia. Nonetheless, a meaningful number of islanders and their imovable property was left behind. Many of those are said to have hid in caves on Vrachionas (the central mountain range); however, vast amounts of their property, valuable icons, vines, olive trees were left to behind to be pillaged by the Ottoman Turks.

On 5 November 1479, Gedik Ahmed Pasha gave the order to ravage and then occupy Zakynthos. His forces destroyed most of its churches, monasteries and many of its dwellings. The destruction was said to be horrific. For the time being they only decided to leave a small garrison in the Castle and did not decide to administer the island as a possession. Thus, in late 1479, after an existence of almost three centuries, the County palatine of Cephalonia and Zakynthos disappeared forever.

In the meantime, Leonardo III Tocco and his family were met with a friendly reception from King Ferdinand I of Naples. After a short stay in Rome, he returned to Naples and proceeded to plan the recapture of his dominions. Shortly after the death of the Ottoman Sultan, Mehmed II in 1481, Leonardo III Tocco and a Neapolitan fleet in vain summoned the Ottoman Turkish leader of the garrisons of Cephalonia and Zakynthos to surrender. However, Leonardo III Tocco’s brother Antonio and a band of Catalan mercenaries easily recovered the two islands as the Ottoman Turkish garrison was small. But Antonio’s success alarmed the Venetians, which were fearful of the islands falling again into the hands of the King of Naples or his vassals. Additionally, they were unwilling to break their treaty with the Ottoman Empire and support Antiono Tocco’s actions.

Consequently, the Venetian governor of Methoni (Modon) dislodged Antonio Tocco and his band of Catalans from Zakynthos in 1482. Antonio Tocco hung on to Cephallonia for another year or so. However, he irritated the local inhabitants after giving his implicit support of corsairs using the island as a refuge. This also shocked the Venetians. And so, in 1483 after a futile attempt to bribe him, the Venetian Republic aided by many of the local inhabitants prepared to attack him. Thereupon, the garrison of the Fort of St George slew him and opened their gates to the Venetian commander. Lacking any opposition, he made himself master of the whole island and appointed its first Venetian governor.

Leonardo III Tocco pathetically asked for the restitution of the two islands from the new Sultan, Bayezid II. However, the Sultan demanded them for himself. In vain, Venice strove to retain Cephallonia but which in 1485 she accepted she had to cede to Bayezid II. It finally passed into her hands in 1500. But she succeeded in keeping Zakynthos on the condition of paying an annual tribute of 500 ducats.

As for the Tocco family, they made no further efforts to recover their island domain as the kings of Naples were now threatened by France, and had no wish to irritate the Sultan into a second attack upon Otranto.