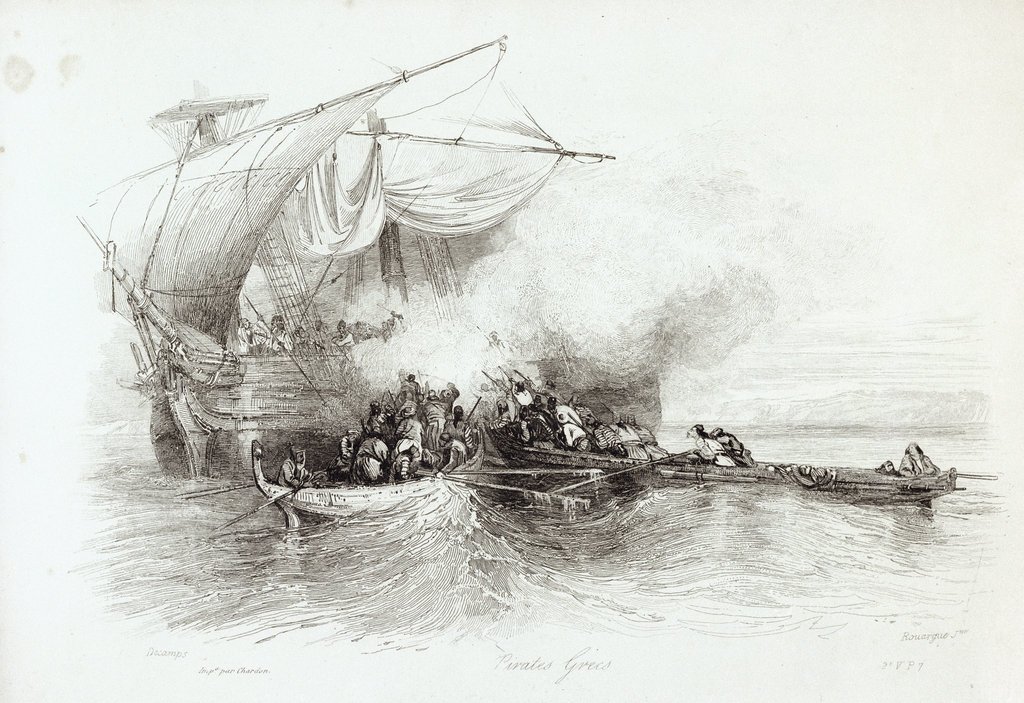 Zakynthos was considered a relatively wealthy island throughout the period of the Venetian occupation, so pirates and corsairs presented a constant threat, compelling Zakynthians to remain vigilant. So much so they developed a relatively sophisticated early warning system using special guards, fires and guardhouses which some survive to this day. However, despite suffering from pirate attacks some Zakynthians also became well-known pirates or corsairs. Although the island was never known as a den of pirates like Mani, Peloponnese or Sfakia, Crete.

Given commerce and trade was the primary concern of the Venetian Republic; particularly, with the Ottoman Empire, they severely condoned corsairs and pirates operating in the eastern Mediterranean. However, they did vary their policy depending on whether they were at war with the Ottoman Empire. For example, the combined Christian fleet which also included many Venetian galleys that fought at the Battle of Lepanto in 1571 employed Greek sailors who were previously partaking in piracy against the Ottoman Empire. After 1571, with the Ottoman fleet in disarray after Lepanto, many of these Greek pirates continued their activities with relative immunity. Even Christian corsairs from elsewhere in Europe flocked to the Eastern Mediterranean after 1571. It is reported that many of these corsairs, such as those funded by the Grand Duchy of Tuscany, were welcomed in Zakynthos because many of the sailors that served on these ships were Ionian Islanders themselves. During other periods of Venetian-Ottoman conflict, the Venetians urged the Ionian Islanders to conduct espionage and piracy. They not only provided them with protection certificates but sometimes even ships. Of course, after the cessation of fighting it was difficult to control the piratical activities of the Ionian Islanders.

One of the most well-known Greek pirates was Zakynthian, Eustathios Romanos or perhaps better known as Manetas. He was active primarily between 1678 and 1684 based around the well-known pirate lair of the Aegean island of Milos. Supposedly, he amassed enormous wealth and owned seven galleys with cannons and a large crew. After the outbreak of the Morean War (Sixth Venetian-Turkish war) he joined the forces of Morisini and became a corsair for the Venetians. During the campaign to conquer Preveza by Venice and her allies, Romanos sailed east and captured Arta. For his later services in helping to conquer Chios, he was awarded the title of Colonel by the Venetian Republic. He was also involved in the trade of Turkish slaves. His son, Georgios (Zorzo) also continued the occupation of his father and menaced the coasts of Peloponnese, Zakynthos and Kefalonia. He also employed sailors from these regions and islands. Between 1734 and 1735, in the service of the Austrians, Zorzo Manetas and his brother Andreas Romanos and their seven galleys and another boat which they had acquired in Trieste with Austrian funds, manned with Zakynthians, Kefallonites, Ithacisians and Lefkadians, captured 15 French ships in the Ionian and Aegean Seas. Manetas and his brother were arrested by the Venetians and taken to Corfu. However, a year later they were released and departed for Trieste and Vienna. The Greeks as crews of foreign corsairs gained a reputation for their perseverance, austere lifestyle and hard work. In 1757 Panagiotis Dragos, a captain of an English ship from Minorca equipped 24 cannons and 42 men, mainly from Zakynthos and Kefalonia, and attacked and captured a French ship with a cargo of wheat in the port of Volos. In 1759, Zakynthian Konstantine Kalamatas (some scholars claim he was from Patmos), in the service of England made his presence felt on the Peloponnese coast. His crew consisted of 87 Greeks from the Ottoman Empire and Greek subjects of Venice. Based in Kythera he is known to have seized a French ship, where afterwards they led it to Mani and distributed the spoils.

During the latter stages of the Orlov Revolt, ships captained and manned by Ionian Islanders, including the Zakynthian captain, Padouveros took part in the Battle of Cesme with the Russian fleet against the Ottoman navy in July 1770. The Ottoman fleet was destroyed. After that Ionian Islanders manned large and small ships and conducted operations as corsairs under the Russian flag. Shortly after, the Treaty of Kucuk Kaynarca of 1774 between the Russian and Ottoman Empires created even more favourable conditions for the Ionian Islanders allowing them to legally retain the privileges which they had attained as corsairs. In addition, many of the ships the Russians abandoned in the eastern Mediterranean were bought by Greek subjects of the Venetian Republic, namely, Ionian Islanders such as Delikostantis from Zakynthos who operated in an area ranging from the Ionian Sea to the area around Kastellorizo.

Lambros Katsonis was a Colonel in the Imperial Russian Navy, combatant in the Second Russian-Turkish War (1787–1792) and widely considered an early hero of the Greek War of Independence. In the late 1770s he assembled a Greek fleet of 70 ships and harassed the Ottoman Navy in the Aegean and Ionian Islands. Although not Zakynthian, his ships employed many sailors from the island. Later in 1788, in the service of the Imperial Russian Navy, he sailed from Trieste with his fleet manned Greek corsairs to Zakynthos. The Venetian Republic tried to restrict his activities given many of his sailors were Venetian subjects. Later, he tried to organise a pan-Hellenic naval campaign to rebel against the Ottoman Empire but he was ultimately not successful.