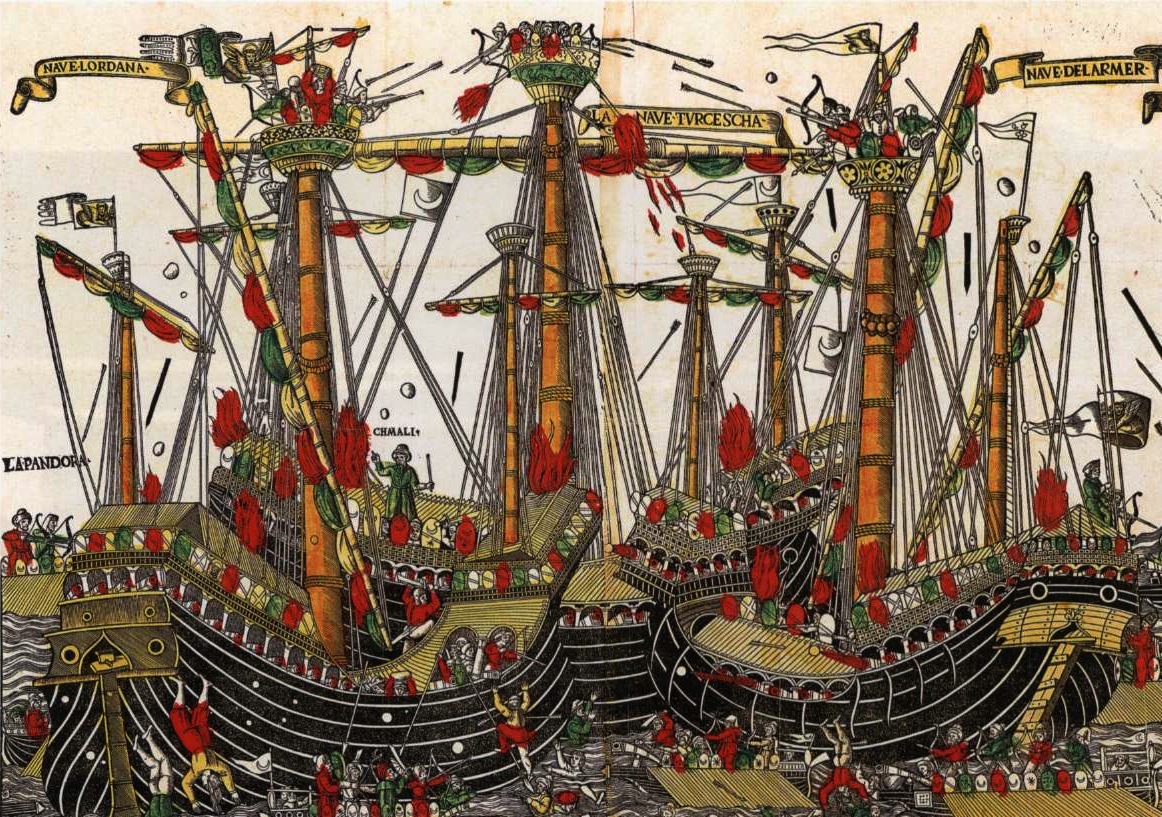 The Second Ottoman–Venetian War (1499–1503) saw the Ottoman Turks, under the command of admiral Kemal Reis, make substantial gains against Venice. In July 1499, the Ottoman fleet under Kemal Reis and the army under Mustafa Pasha laid siege to the strategically important Venetian outpost of Nafpaktos (Lepanto).

The news of the approaching Ottoman fleet sent the provveditore of Zakynthos, Nicolo Ferro, and the people of the island into a state of panic given that the Sultan’s representatives had protested several times recently to the Venetian ambassador in Constantinople about the reconstruction of the Castle of Zakynthos being in violation of their treaty. In retaliation, the Porte threatened to attack the island. Fears of an attack were magnified when Vola Leudari traveled from Corfu to Venice and reported to the Venetian Senate on 20 July 1499 that the Porte was greatly dissatisfied with the Republic for its failure to abide by the terms of the treaty, as well as the Venetians’ providing shelter to a number of Christian corsairs and pirates praying on Ottoman shipping. Ferro continued to communicate his anxiety and the fears of Zakynthians about a possible Ottoman attack on three separate occasions to the Senate during April and May 1499. He also requested permission to spend on strengthening the fortifications of the castle. A month later, Ferro sent another letter to the Senate about the appearance of the Ottoman fleet in Zakynthian waters.

From mid to late August 1499, the two opposing fleets chased each other up and down the coasts of the Peloponnese, before Kemal Reis finally engaged in a series of battles – some of which occurred just south of Zakynthos – and then unexpectedly defeated the Venetian fleet under Antonio Grimani at the Battle of Zonchio. A French fleet of 22 ships, composed largely of Hospitallers and commanded by Gonzave de Cordone, had arrived in the Ionian Sea in mid-August and had anchored near Zakynthos with the intention of assisting the venetians. Grimani had urged the French commander to stay in Zakynthos because of the continuous movements of the Ottoman fleet nearby. However, the two allies fell out and the French decided to attack Kefalonia, which was then held by the Ottomans. The disagreement between the Venetians and the French allowed the Ottoman fleet to enter the Gulf of Corinth and head towards Napfaktos to coordinate their efforts with the land forces under Mustafa Pasha. A little earlier, by order of Grimani, a company of Stradioti from Zakynthos, under the command of Theodoros Palaiologos was sent to Nafpaktos to reinforce the castle, but they were unable to prevent its surrender on 29 August 1499. In early September 1499, Antonio Grimani and his fleet sailed to Zakynthos. A few days later, Palaiologos and his Stradioti returned to the island and announced to Grimani the news of the fall of Nafpaktos.

Napfaktos had approximately 7,000 inhabitants at the time of its surrender. Many of those inhabitants were allowed to leave following an agreement with the Ottoman Turks. On 25 October 1499, many soldiers from Napfaktos made a request to the Venetian Senate to serve in the Venetian forces – their request was accepted shortly after. Many of those soldiers and their families were then allowed to settle and provided with land to cultivate in Zakynthos. Some of the most leaders of these soldiers were the families of Daras, Petas, Mazarakis and Torelis, and prominent families of soldiers were the families of Bouas, Mountanou, Helmis, Grammatikopoulos, Fratis, Mouzakis, Giannitzis, Flokas, Labetis and Kontis. Some of these continue to be prominent on the island today. In a strange twist, some of those allowed to re-settle were prior refugees from Zakynthos who had fled to Napfaktos following the raids of 1479.

In anticipation of an imminent attack by the Ottoman Turks, the Zakynthians had started to sell their horses and flee the island with their families and their movable belongings. To deal with the depopulation of the island and decreasing manpower to defend it, Antonio Grimani took the extraordinary step of proclaiming to the people of Zakynthos that his forces would confiscate the movable and immovable property of those who chose to flee from the island. In the meantime, Nicolo Ferro was replaced by Grimnani with Nicolo Marcello, who had served as an assistant to the provveditore and as a sopracomito (galley captain) of the island. The new sopracomito was the son of Nicolo Marcello, Nadal Marcello. Fortification work on the castle in Zakynthos continued apace and the forces assigned to defend the island began to gather. Moro Bianco, who had served in Zakynythos as contestible, was appointed to lead the military forces guarding the castle. Jacometto da Novello was specifically hired from Corfu to lead a company of mercenary recruits from Italy. Theodoros Palaiologos and his company of Stradioti had returned to the island and were training with their war horses. The provvedittore, Nicolo Marcello reduced taxes for the Stradioti to encourage them to stay and fight. And the help of his three military leaders he prepared the unarmed population for the defence of the island.

Despite the fear of an imminent attack on the island, the military leaders of Zakynthos gathered their forces for a planned attack on the Castle of Saint George in Kefalonia toward the end of 1499. Antonio Grimani also called for missions from Corfu, Zakynthos, Methoni and Koroni. During the first days of December, Theodoros Palaiologos sent about 120 Italians, 52 war horses on the galleys of Nadal Marcello and others. However, they were unsuccessful and returned in March 1500, having lost two-thirds of their forces. Many families from Kefalonia also found refuge in Zakynthos. The Zakynthians remained on high alert during this period due to raids by small Ottoman naval forces. For example, on 29 May 1500, Nicolo Marcello sent a letter to Venice regarding the abduction of 22 nuns and raid of valuable items from the island of Strofades off the coast of Zakynthos.