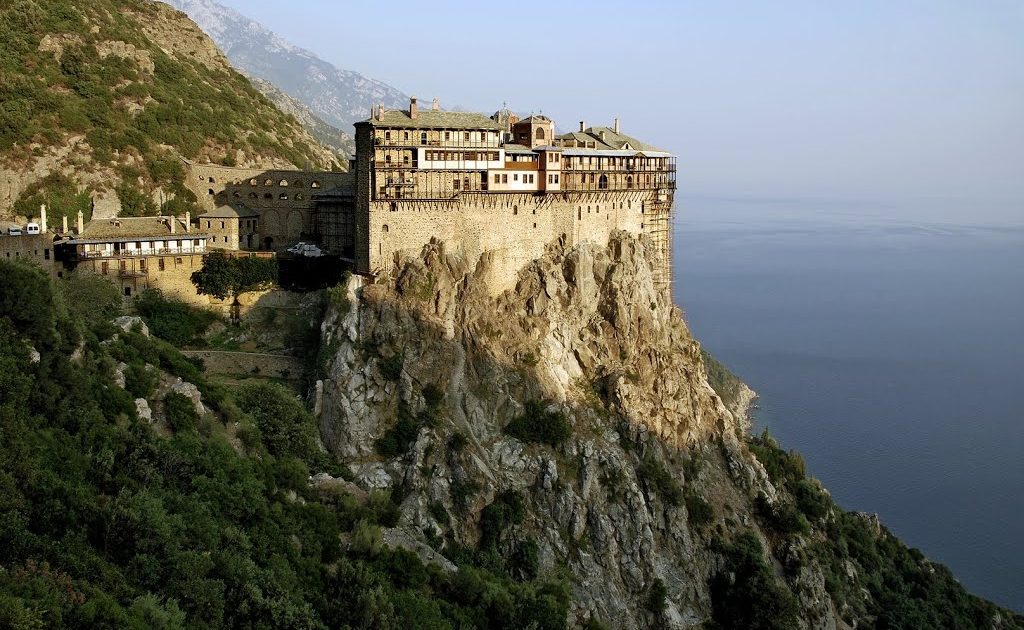 The churches, places intended to meet the needs of Christian worship, are a characteristic and inextricable element of the Greek landscape. From the austere, aisleless country chapels to the imposing cross-in-square types, churches are built according to specific architectural forms which were gradually established since the first centuries of Christianity. Their decoration whether painting, mosaic or other – always reflects the Orthodox doctrine, following specific style trends and established iconographic programmes.

Over the centuries, important architects, builders or painters have contributed to the construction and decoration of the Greek churches, many of which now are scheduled monuments.

The oldest churches in Greece, the most important of which are found in Thessalonica, Nea Anchíalos, Nikópoli, Athens and Corinth, date from the early Byzantine period (4th  6th centuries A.D.). During this period, important ancient Greek temples, such as the Parthenon, the Erechtheion or the Thission in Athens, were transformed into churches, while many Christian churches were built near to or on the site of known idolatric centres (e.g. in Daphní, Elefsina, Delphi, Epidaurus, Delos). Churches were also built on sites connected with people or events which were important to the Christians, such as the burial sites of martyrs.

During the Middle Byzantine period (7th century A.D. -1204), Greek churches acquired an intensely local character and were quite different from the corresponding monuments in Constantinople. The most important ones are found in Attica, Viotía, Argolida, Mani et al. Some of them are the main church of the monasteries they belong to and are called Catholicon.

The churches of the Late Byzantine period (1204-1453) continued to follow traditional architectural models. Some of the most important churches built in that period are found in Arta, Véria, Kastoriá, Thessalonica and Mystrás. The churches that were built during that time in areas under Frankish or Venetian occupation adopted many western elements  whether architectural or decorative.

The churches built in Greece during the Ottoman occupation are particularly austere, with the exception of the churches in areas under Venetian or generally western occupation (Crete, the Ionian Islands). After the War of Independence, the economic recession did not allow construction of grandiose churches. An exception is the Metropolis of Athens which was built in the middle of the 19th century with the intention of being the central church in the capital of the newly established Greek state. However, ecclesiastic architecture has flourished again since the end of the 19th century, in particular during the first decades of the 20th century.

Like the churches, monasteries are closely connected with the history and tradition of Greece. By monastery we mean the total number of buildings in which monks or, more generally, the members of a religious community live. Monasteries comprise a central church (called the Catholicon), chapels, the monk`s cells, guest houses, the dining room (the refectory), the kitchen, the library, etc.

The institution of monasticism first made its appearance in the 4th century A.D. with the anchorites (or hermits) in the desert of Egypt, and spread very quickly to other areas of the then Byzantine empire. It reached a peak around the 10th century A.D. and this led to the establishment of many monasteries.

The largest monastic community in Greece is located on Aghio Oros (Mount Athos), also known as the Garden of Panaghía (Virgin Mary). The first monks settled there during the 5th century A.D. However, the first monastic community was created in the 10th century when Ossios Athanassios the Athonites (from Mount Athos) founded the Monastery of Megisti Lavra (963) which has had a leading status among the other monasteries of Athos since then.

The particularity of Aghio Oros (Mount Athos) lies in the fact that it is an autonomous administrative region of the Greek State which politically falls under the jurisdiction of the Ministry of Foreign Affairs and spiritually under the Ecumenical Patriarchate in Constantinople. All twenty Athos monasteries lead a communal way of life; that is, they impose common mass, prayers, accommodation, meals and work on the monks. The monks elect the person in charge of each monastery, the Abbot, who retains the title for life. The monasteries of Aghio Oros (Mount Athos), where the principle of the ávaton (inaccessible) still applies to women, possess a large number of heirlooms (manuscripts, historic documents, chysobulls, portable icons, etc). Apart from all the above, the monasteries themselves constitute unique cultural monuments, not only for Orthodox Christianity and Greece, but for the entire world as well.

The second biggest and most important monastery complex in Greece is Metéora. The first hermits settled there during the 11th century. The oldest monasteries, though, date from the 14th century. Of the 24 original monasteries there are only six in use today, while the remaining ones are deserted; the monasteries of Metamórphosis (Transfiguration), Varlaám, Ag. Nikólaos Anapafsás and Aghía Triada (Holy Trinity) are for monks, while the monasteries of Roussano and Aghios Stéfanos are for nuns. The monasteries of Metéora have been characterised monuments of cultural heritage by UNESCO.