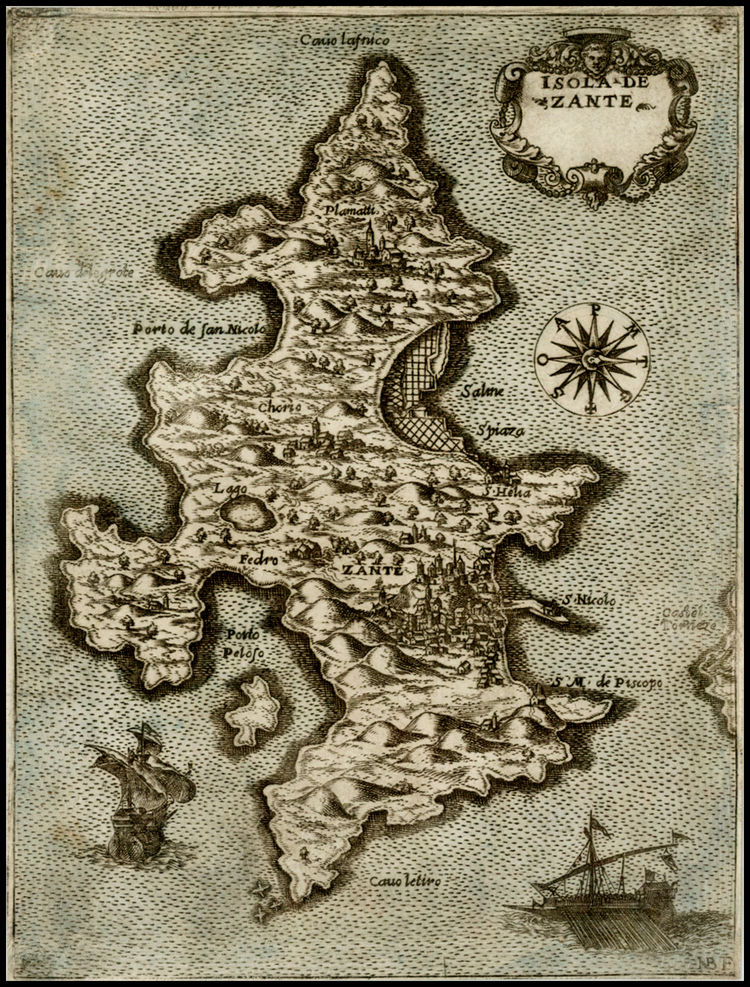 The governance of Zakynthos was also made difficult by the intervention of other foreign powers like the British. Britain had steadily grown alarmed by the growth of Russian power in the Mediterranean; particularly, Corfu. It also had a strong interest in the currant trade between Zakynthos and Kefalonia and northern Europe. In order to provide a counterweight to the power of Russia, Ottoman Turkish Empire and the Septinsular central government, and also because of narrow economic interests, some Zakynthian Nobili and Cittadini maintained contact with the British Admiral Nelson via the intermediary of Spyridon Foresti, the British consul in Corfu. The Zakynthian local council even went as far as to award Nelson a Gold Sword in appreciation for his efforts to help in removing the French from the island.

Throughout 1800 agitation increasingly grew on Zakynthos, as the Cittadini, Popolari and peasants began to understand that essentially complete power had been handed back to the Nobili of each island which were given almost free rein to oppress the local population again as they had done for centuries. In addition, one of the articles in the constitution of the Septinsular Republic only recognised the Nobili included in the Libro d’Oro before November 1799 – which would have excluded the newly included Antonions Martinengos, his brother-in-law and Stelios Stavropodis. Another consequence was they would be excluded from the local council. This created another rupture with the senate in Corfu and their allies among the Nobili on Zakynthos. As a consequence, a small Septinsular force from Kerykra was ordered to be sent to Zakynthos to quell dissent. At the same time in Zakynthos, 2,000 armed peasants under the leadership of the Nobili gathered at the estate of Nikolaos Foskardis and planned to lay siege to Zakynthos town and deal with Antonios Martinengos and his party. In turn, Antonios Martinengos’s forces took all measures to defend the town and the local council.

On 8 January 1801, James Callander, a British officer under the service of Nelson, arrived in Zakynthos to spread anti-French propaganda and to do the bidding of the British. He had met with Antonios Martinengos and his party and they came to the conclusion they needed each other to realise their objectives on the island.

Broader geopolitical events had evolved and the Russian military contingent was withdrawn from Zakynthos and some of the other Ionian Islands. On the night of 7 February 1801, under fire from Foskardis’s peasant forces, armed men from Martinengos’s party led by Tzortzi Strouza-Solomos, along with the support of the British officer James Callander, overpowered the garrison in the castle, lowered the Russian and Ottoman Turkish flags and raised the British flag. Furthermore, the following day Martinengo’s forces declared independence from the central government of the Septinsular Republic. In effect, initiating a coup d’état. They faced little resistance from the peasants under the guidance of Foskardis and Septinsular troops based in Corfu failed to arrive.

A representative of the Septinsular Republic who also happened to be Zakynthian, Nikolaos-Draganigos Sigouros-De Syllas arrived on the island on 11 February 1801 and met with the British consul, Sargint, Callander, Martinengos and the Nobili. Sigouros-De Syllas then proceeded to visit his palazzo in Zakynthos town despite warnings from people in the local council that they could not guarantee his safety from the Cittadini and Popolari. A short time later, an armed group peasants and Popolari under the orders of Martinengos surrounded the palazzo of De Syllas and demanded he leave the island. The next day almost the whole town was up in arms against Sigouros-De Syllas. Some members of the Cittadini and Popolari had now set up a cannon threatening the palazzo of Sigouros-De Syllas. Also, a ship from the Septinsular Republic tried to dock in Zakynthos but was also threatened by an armed men representing Antonios Martinengos. Finally, Sigouros-De Syllas and his family was led away to an Ottoman Turkish frigate anchored off Zakynthos by a British escort. Furthermore, the forces under the leadership of the Nobili, Foskardis noticing that the British were providing some legitimacy to the part of Martinengos, also deemed it prudent to withdraw. The island of Zakynthos was now effectively independent of the Septinsular Republic.[51]

On 12 September 1801, five Ottoman Turkish and one British warship carrying British soldiers appeared in the port of Zakynthos. After some negotiations, the request by the visiting British naval captain was granted and the party of Martinengos took down the British flag from the castle seven months after having raised it. Zakynthos was reconciled, at least for the time being, to the Septinsular Republic. The Ionian Assembly now handed power in Zakynthos to a three-man group called the Syndikoi which was elected by the Great council of the Nobili. The Syndikoi in turn elected a chancellor to govern the island for four months. Afterwards it was rotated to other members of the Syndikoi. The first Syndikoi elected were Antonios Komoutos, Ioannis Martinengos and Petros Chrysoplevris. Given his duties in leading the local militia, Ioannis Martinengos appointed Stelios Stravopodis in his position. Clearly, the party of Antonios Martinengos had retained power in Zakynthos.
Previous Post
Next Post