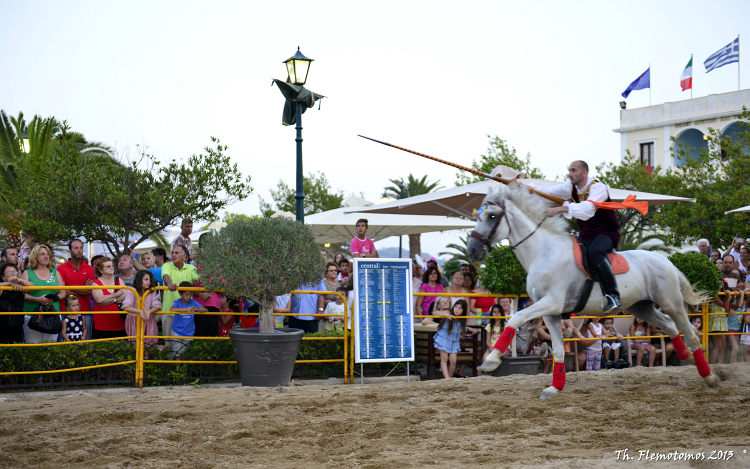 Giostra is one of the oldest events known which takes place during the Zakynthian Carnival. Along with ball dancing, which was mainly held within the two main halls of (Romianiko and Lombardiano) and the well known “Omilies” better known today as street theatre, where locals performed in converted open-air theatres, these were the most common forms of entertainment during carnival period on our reputable Island.

It was a competition in which the competitors were mounted and took part for the chance to win the prize. First prize being a silver sword and a pair of silver spurs for second place and to honor the maiden in which they chose to compete for.

Giostra Di ZanteGiostra in Zakynthos had two different types of competitions. The first being that of the rings, where the knights had to try and collect the small rings which were hanging from a specially designed wooden post. The second was that of Mascaron Moro. In this one the idea was for the knights to cut a feather from the head of a replica of a colored man, it was for this reason they named it ” Giostra of Sarakino”. Following the event there would always be and often a continuation for days a celebration at the winner’s home and his name would be printed in the book of Honors.

Participating in Giostra were the families of the nobles, those of whose names were registered in what was called “(Libro d’Oro). However, although the nobles took part the event was watched by crowds of people from all walks of life. It was characterized by different historians and many would travel far just to see the event. As such, the event formed a more popular style. It is not by chance therefore that Giostra has been mentioned throughout history, literature and in theatre (Erotokritos, Eugenia) including literature by (D. Roma, A. Avouris).

It is not exactly known as to when Giostra actually started. It is believed, however that it is an ancient tradition. Officially, it was first mentioned in 1656 when on the 29th of January the authority of the Ionian Islands (Captain General) Lazaros Motsenigos passing through the Island confirmed it. From the 20th of April 1651 in accordance to the order by (Provvediore Generale) John Anthony Zenzia, the local Council had to submit thirty -two realia from the public trust which was in turn submitted for the winner’s prize. Information published by the historian Sp. De Biazi, makes us believe the Giostra was of late origin and very much loved by the Zakynthian people. It is for this reason it took on a more official (governmental) character. Characteristically a lot of other historians mentioned it giving us the impression that it was one of the biggest events of the year.

The competition between the Knights in Giostra first took place around the area of Agigkos in Bochali, next to the first town in which was built upon the hills for safety reasons within the castle. Later, when the capital of the town became Aigialo, Giostra followed and it was then held along the main road of Rougas Square (today known as Alexandra Roma) and between the two churches located in that area. The day of the event was the Thursday carnival time (Pempti Tirofagou).

Giostra finally took on a more social character. On the day of the event locals would remove flower pots from their windowsills, railings from their balconies as these things gave the idea they were keeping their women enclosed as if jailed within their homes. It was through this act that equality was shown between men and women and that socially it should be expressed.

Over the last few years Giostra of Zakynthos was revived through the non-profit organization “Giostra di Zante”, in which its headquarters is situated on the Island. Its aim is mainly the revival of the event and for it to be placed back into the Zakynthian carnival as well as researching its historical background and its evolvement throughout the years. For this reason every year apart from the performances and competition, they publish a special brochure along with texts-announcements by intellectual people from the Seven Islands and more, thus ensuring that the mystery and importance is expressed throughout the area during carnival.

Giostra Di ZanteThe event nowadays takes place on the last Saturday of carnival (Tirinis). The parade starts with its starting point being at the historical square of Saint Paul. Then it continues through the centre of the town and finally ending up in the main square Dionysios Solomos where the competition of the Knights begins.

Taking part in the parade are hundreds of friends of the organization, Zakynthians and also visitors to our Island all dressed in traditional costume and all characteristically appropriate to the period of when the event first took place. This was all based on historical research and on texts, from family portraits and mainly through the paintings of important Zakynthian artists of that time whose paintings were of such parades taken during the Venetian period.

The Zakynthian story is characteristically displayed in scenes throughout the parade. Firstly, the flags, the banners, hand held carriages, the canopy made of velvet supported by poles used to shade the Nobles as they walk, horses with their carriages, musical instruments and much more. Taking part in the event are also the forerunners of Giostra: The town crier, the patron lady, the general secretary, the judges, the Maestro di Campo, the maidens, who on their behalf begins the countdown and many important authorities from the Island. A leading role that is also within the parade is the Knights always on horseback displaying their coat-of-arms and accompanied by their friends and acquaintances.

Giostra Di ZanteThe competition of Giostra is held in Solomos Square. Firstly the registration of the Knights takes place followed by the announcement of who the competitors will be by the town crier. Then the election of the supervisors of whom the Knights will compete in front of, the display of their coat-of-arms and then the oath is taken to make sure that the rules are obeyed.

In continuation and only after the announcement by the Ambassador the competition begins. The mounted competitors take turn trying to capture the rings and once done are shown before the judges. The crowd joins in by taking bets. Cheering on their valiant victories and disapproving of their failures.

Finally, the winner takes his prize and leaves satisfied as placed behind him is his maiden for whom he has competed.

After the victory’s dance and celebrations take place.

Giostra in Zakynthos has an international character as many other European countries take part in the parade and in the competition. Up until now Italy, with its flag bearers and their magical displays, Slovenia, with its proud Hawk trainers along with their displays with fire and San Marino with their traditional dancing exhibits all take part. The organization has also made efforts to contact other countries and cities throughout Europe in which Giostras are held. The aim is to have future co-operation and to enhance the Giostra in Zakynthos, thus giving it a more European character.

Giostra Di ZanteAlready the non-profit organization “Giostra di Zante” has represented Greece twice in the town of Sulmona, Italy. It is there that every summer the European Giostra takes place and on both times had the victory of third place. With this town there has developed a special relationship and already actions have been made to form a brotherhood between the two towns.

The Giostra of Zakynthos is another proposal for the Zakynthian carnival based on its history and temperament of the Island as it is supported by research from its upmost reliable researchers. It must be embraced by authorities and organizations, everyone’s involvement are necessary for its continuation. Who knows, it may once again become the biggest event during winter as it was in the past. Thus being part of our history which cannot be erased.