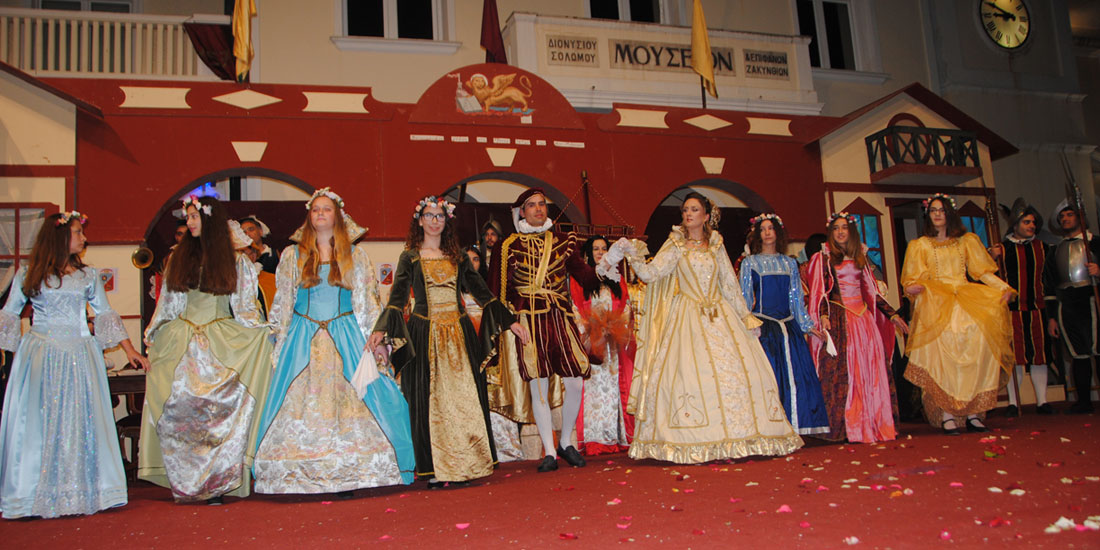 Zakynthos is an island, which for many years was under the occupation of the Venetians, Italians and as a result influences are apparent in the customs of the island. The Zakynthians adopted many customs from the Venetians. The Venetian Wedding is a custom which revives every year since 2005 during the last week of Carnival. It’s a unique play act imitating a noble wedding of the 16th century, with venetian costumes.

This  type of  marriage could not  of course take place for all the inhabitants of the island but only for those who had the financial means,  meaning the island’s nobility, the Kontides who wanted to show their  social position and the power they had in the local society.

As a result, a marriage between the noble families of those times was one of the most important events of that period.   The preparation for the wedding began  long before the event  as the bride and the other women invited began sewing their attire to be ready for the wedding rehearsal.  The same applied to the gentlemen as their attire had to be worthy of their social position.

The Venitian Wedding  is a cultural event taking participants back to the 16th century.  The noble procession of the  Venetian Wedding begins at  St. Paul’s square on the Western part of the town, then crosses the most historic street of the city, Alexander Roma  and terminates in Piazza San Marco, the central square of Zakynthos Town where a stage has been put up  to host the event.   The wedding ceremony takes place in the presence of a “nodaro” (notary).   It’s worth noting that the noble procession of the Wedding opens with drummers and boys bearing flags followed by the couple and relatives.

The Nona (grandmother) is carried in an elegant  lentika (closed carriage of excellent craftsmanship typical of the nobility)  followed by the chests containing the bride’s dowry .  The guests follow dressed in expensive costumes of that period, while young girls carry baskets with rosepetals and typical wedding sweets (sugared almonds).  After the ceremony Renaissance dances are performed and traditional local specialties are given out.