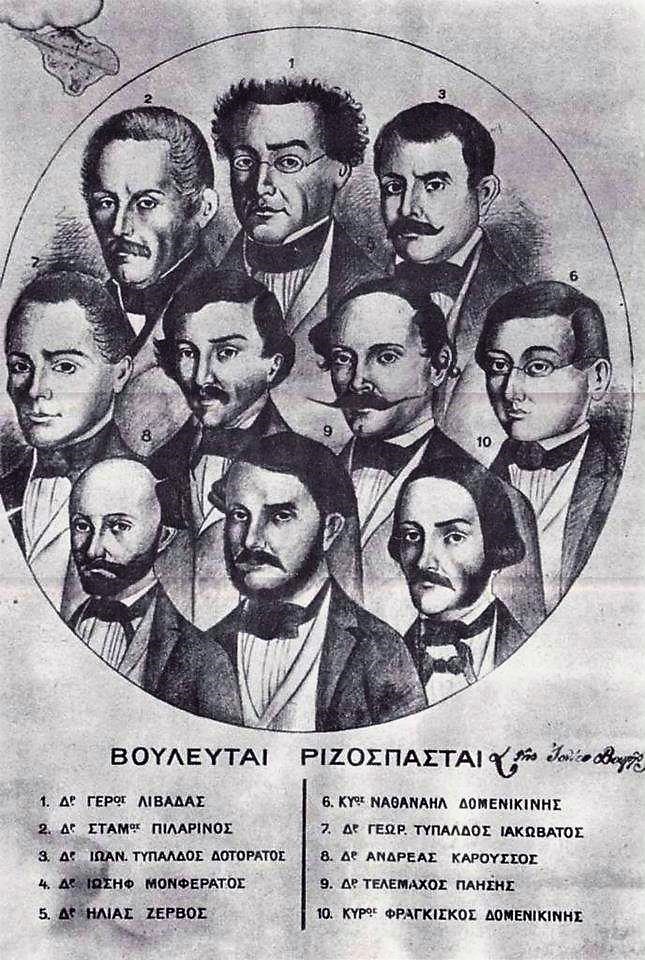 Around the time of other revolutionary movements in Europe in 1848, the Party of Radicals was formed out of an earlier group called the Liberals to agitate for the end of the British occupation of the Ionian Islands and in favor of union with the Kingdom of Greece. The Party is often labelled the first party of principles in Greek history and a precursor to the socialist movement in Greece. However, the Party not only agitated for union with Greece but also protested against the political and social situation in the Greek state. Contacts were maintained with key figures of the Risorgimento including Giuseppe Garibaldi and Giuseppe Mazzini.

In late 1850, the Party’s MP Ioannis Typaldos proposed in the Ionian parliament in Corfu the resolution for the union of the Ionian Islands with Greece. The resolution was signed by several Zakynthians as well as Kerkyrians and Cephalonians. Britain responded with the closure of newspapers like To Mellon in Zakynthos, persecutions, imprisonment, and even exile. The two major protagonists Elias Zervos and Iosif Momferatos were exiled to Antikythera and Erikousa respectively. In 1862, the Party was split into two factions, the United Radical Party and the Real Radical Party. The former gave priority to Union rather than socio-political reforms, while the latter believed that only through social reform could complete national rehabilitation be achieved. The Real Radical Party struggled as it faced resistance not only from Britain but also from the Kingdom of Greece. In contrast, the United Radical Party under the leadership of Zakynthian politician and doctor, Konstantinos Lomvardos (1820–1888) and to a lesser extent the Zakynthian journalist, Georgios Verikios (1818–1891) carried on with their struggle for the union of the Ionian Islands with Greece.

On May 21, 1864, the Greek flag was hoisted on the Ionian Islands to welcome the Greek army and unification with the Kingdom of Greece. The United Radical Party was dissolved immediately.

Konstantinos Lomvardos was one of the most prominent members of the Radical movement and a member of the Ionian Parliament from 1852. He was well known for his rhetorical powers. After the Union with the Kingdom of Greece, Lomvardos participated in the government of Koumoundourou as Minister of Education, Interior and Justice. In 1871, he joined the party of Charilaos Trikoupis and was elected President of the House. From 1875 to 1888, he served as Minister of the Interior, Justice and Education. Apart from his political activities, Lomvardos published a number of political and scientific texts. Lomvardos was the founder of the Lomvardos party of Zakynthos.

Other notable Radicals from Zakynthos were Nathaniel Domeneginis (1793–1854), elected Member of the Ionian Parliament in 1850. He signed, along with Frangiskos Domeneginis and Angelos Desyllas, the first resolution of the Union with Greece. He wrote various leaflets and articles in favor of the Union and against the British occupation. Excited by the revolt in Epirus in 1854, he decided to fight under the command of the generals, Karaiskakis and Tzavelas. In the Battle of Petta in 1854, he was arrested and executed by the Ottomans. Ioannis Lisgaras (1805–1872), was a notary from Zakynthos who in 1851 was exiled to the island of Othoni. He was elected Member of the Ionian Parliament of 1852. He fought for the Union with Greece with numerous articles and brochures. In 1866, he was elected Mayor of Zakynthos and was distinguished for his honesty and his excellence in administration and finance.

Frangiskos – Lambrinos Domeneginis (1809–1874), cousin of Nathaniel Domeginis, was a composer, music teacher, conductor, painter and an enthusiastic Radical. In 1829, he took part in the Greek Revolution as an officer of the regular cavalry and distinguished himself in operations around Euboea. He signed the first resolution of the Ionian Parliament and a year later he was exiled to Antikythira. During his exile, he was re-elected as a member. In 1853, he returned to the House and submitted a resolution, together with Lombardos and Verikios, for the return from the Kefalonian Radical exiles Elias Zervos and Iosif Momferatos. He was involved in the Italian-Greek committees where he came into contact with Giuseppe Garibaldi and other prominent activists in the Risorgimento. Dimitrios Kallinikos (1814–1890) was very wealthy and well-educated and together with Ioannis Ioannopoulos, Georgios Verikios and Pavlos Tavoularis published the newspaper O Rigas, the first radical newspaper from Zakynthos. He was exiled in 1851. Shortly before the Union with Greece he fell out with the Radicals and ceased participation in the movement. Georgios Verikios was a journalist, orator and prefect. He was one of the first to support the right of self-determination and Union with Greece. He was the editor of the Magos and O Rigas newspapers. Verikios was exiled and expelled from the British occupation for his ideas.