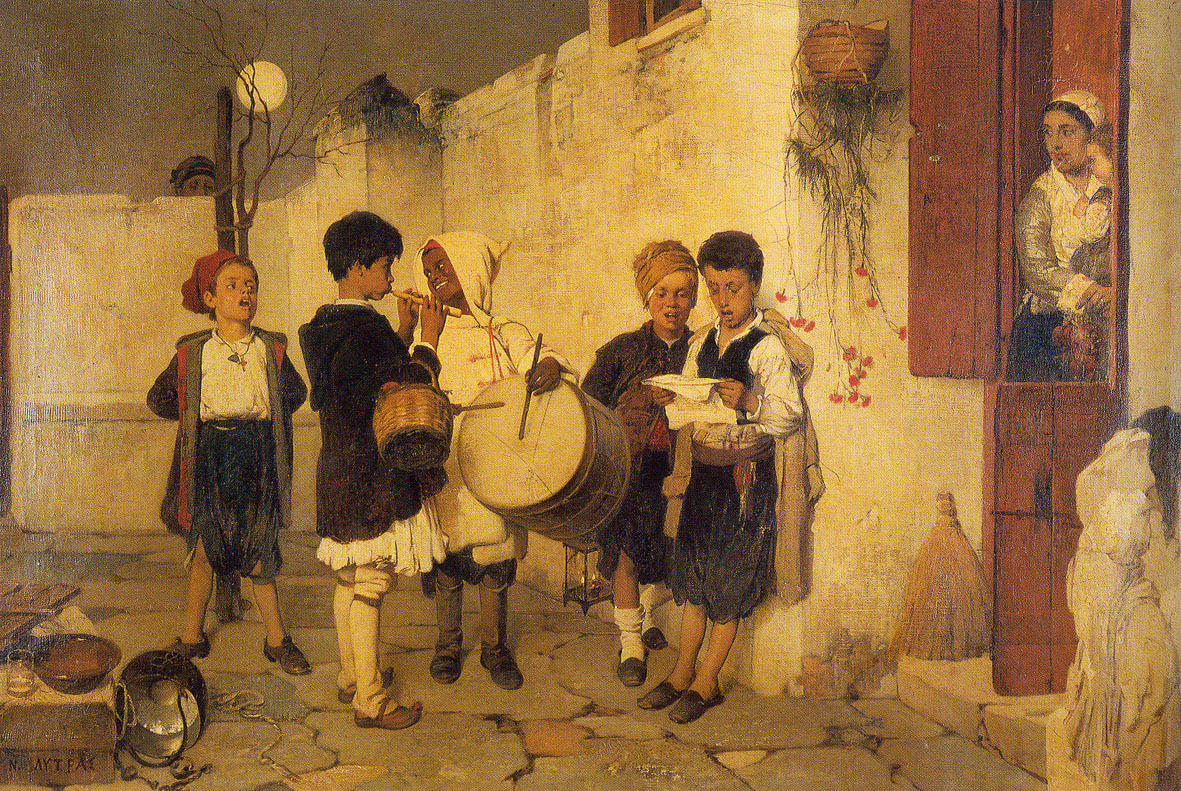 19th Century: In search of a visual identity
The history of the visual arts is similar to that of the modern state itself, and has reflected the relationship between centre and the periphery. No sooner had Greece become independent (in 1830) than it began to function as a satellite to other cultures. Artists were stifled, and behaved in a subservient manner. When King Otto and his Bavarian entourage arrived in Greece, art was subjected to a process of Europeanisation.

There were two factions: on the one hand was the vernacular, post-Byzantine tradition, which continued to be popular among the general public, and on the other was the new ruling class of Phanar Greeks* and scholars, who wished to see a process of `modernisation“Hellenocentrismwas the name given to the new style. Its ambition was to use the glories of ancient Greece to add glamour to present which could only be described as miserable. Neoclassicism, with the blessing of the Othonian state, became the official interpretation of art and history.

The purist dialect of Greek called katharevousa, `historicist` architecture, public statuary consisting of depictions of togaed dignitaries, a `heroic` school of painting (which used a romantic style to illustrate the recent liberation from the Ottoman Empire), the theatrical genre known as the `comedy idyll`s and the first fiction on historical themes – all these were manifestations of the same aesthetics. It was seen as imperative that Athens, the new capital, should transform itself and don a mantle of ancient glory. Athens should live up the image that the entire Western world had shaped of it. The ideological and aesthetic problems were largely therefore of an imported nature, though this did not prevent them from affecting artistic creation.

During the Othonian period (1832-1862), classes in drawing and tracing were introduced into schools (1836). In 1840, a Department of Painting was set up in the National Technical University (founded in 1835), whose teaching staff, in 1853-1855, included the Bavarian Ludwig Thiersch, who served as `lison officer` between Munich and Athens.

It would be true to say that throughout the nineteenth century a fertile relationship developed between Greece and Bavaria. It was common for young students at the Technical University to make their way to `Athens on the Isar` – Munich, that is – for their postgraduate studies. There, they became completely assimilated into the prevailing academic climate, although they retained distinctive artistic virtues that were all their own. Nikolaos Ghizis (1842-1901) for example, was elected Professor in the Konstlerakademie of Munich, a post in which he served to the time of his death. Ghizis and his fellow-islander (of Tinos) Nikiphoros Lytras (1832-1904) became the twin centres of a group of painters who combined academic tendencies with advanced technical accomplishments (Constantinos Volonakis, Polychronis Lembesis, Symeon Savvidis, Georgios Iakovidis, and others) and gained the name of the `Munich School`. When Iakovidis (1853-1932) returned to Greece he came to occupy a dominating position in the art world, being appointed Director of the newly-founded National Gallery (1900), Professor in the School of Fine Arts (to 1930), and Academician.

It is characteristic of the situation that the National Gallery existed as an institution from the beginning of the nineteenth century, but did not actually acquire a building in which to house its collections until 1970.
Theodoros Vryzakis (1817-1878), recorder of the Greek War of Independence, is often seen as the first `art painter` of modern Greece.

Vryzakis` works are illustrate rather their interpret the struggle for liberty, and although they are moving in their naivety, their approach is devoid of character. Vryzakis stayed on in Munich and was among the founders of the School based there. Yet Munich was not the only source from which this `fustanella painting`emanated. Recent evidence suggests that much of this visual historiography can be ascribed to influences from Italy and France: Dionysios Tsokos of Zakynthos (1820-1862), another of the patriotic painters, studied in Venice under Ludovico Lipparini and returned to Greece in 1847.

The progress made in painting led the Greek state to include works of the visual arts among the exhibits it sent to the World`s Fairs of Paris (1855) and London (1862), where, indeed, they won awards. At about this time, two associations whose aim was to promote the arts were founded: the Fine Arts Association, and the Hellenic Association of the Sciences and Arts. By the end of the nineteenth century, Greek society felt that it had become European enough to indulge in a little nostalgia for the East and its mores, following in the footsteps of the French Orientalists.

Among the artists of this tendency were Theodoros Rallis (1852-1909), who had studied with J.L. Gerome, and Iakovos Rizos (1843-1916). Sculpture was evolving in parallel, with Yannoulis Halepas (1851-1938) and Dimitrios Philippotis (1839-1920) as its principal representatives. The biography of Halepas is the stuff of fiction. After studies in Munich, and still young, he produced works which combined Neoclassical techniques with realistic observation. He succumbed to mental illness and disappeared from the artistic scene for almost half a century; fourteen years of which (1888-1902) he spent in Corfu Mental Hospital. After 1920, he returned to sculpture, turning out works which were completely free of academic influences, exuding profound spirituality.