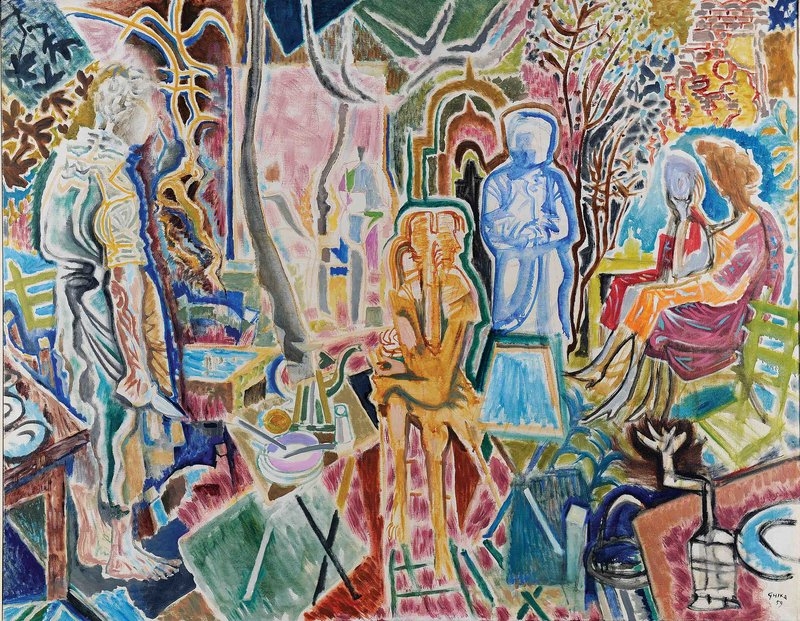 20th Century: In line with the western artistic movements

The first modern steps
Greek art came of age, and attempted to set the boundaries of a national school. Exhibitions of works by both Greek and foreign artists became more common, and the flow of artistic information often went beyond scholarly level. In 1901, a publication devoted exclusively to the arts was published. It was called Pinakothekes (`Art Galleries`), and it was timed to coincide with the Olympia Festival at the Zappeion Hall.

In 1885, there was an exhibition of 400 works of painting, sculpture and icons by 115 different artists. Of equal importance was the exhibition that took place in –1896 on the occasion of the Olympic Games. In 1897, the `Society of the Friends of the Arts` was formed and embarked on the task of promoting a generation of artists with European background. In 1900, the Society organised an exhibition with participants who included two artists whose names were to become landmarks in twentieth-century Greek painting: Constantinos Parthenis (1878-1967), exhibiting for the first time, and Georgios Bouzianis (1885-1959). Parthenis was later to become the patriarch of the `national` school of painting. His curiosity set out from the Jugendstil and brought him to Impressionism and Cezanne. He was the best-informed artist of his day, and he clashed with the academic establishment of the School of Fine Arts, in which he taught from 1929 to 1948: Yet another progressive movement (1917), was the `Art Group`, headed by Nikolaos Lytras (1885-1927). In 1919, the Group held an exhibition in Paris, with participants including the engraver Dimitris Galanis, a friend of Derain, Braque and Picasso and a member of the French Academy. The nineteenth-century painters Ioannis Altamouras and Periklis Pantazis (both of whom died young) may be regarded as forerunners of this group.

The successes achieved by Greece during the two Balkan Wars and the First World War – with Eleftherios Venizelos as Prime Minister – created an atmosphere of elation and a spirit of optimism where artistic expression was concerned. The Hellenocentrism of the nineteenth century seemed now to have been vindicated. However, the Asia Minor disaster which followed hard on the heels of the triumphs created new conditions of national self-awareness: Greece might have lost in terms of territory, but she (stet) gained a more profound understanding of herself.

During the inter-war period, Berlin-based Greek artist Georgios Bouzianis was part of the Expressionist movement (belonging to the Neue Munchener Sezession). Bouzianis was a leading representative of Expressionism, which explains the degree of incomprehension and rejection that greeted him in his homeland.

Photios Kontoglou (1895-1965) was an artist of equal stature. His purpose was to blend the Byzantine tradition with the requirement for Hellenocentric modernism. In that sense, Kontoglou had a decisive impact on what is often called the `generation of the Thirties`.

Photios Kontoglou (1895-1965) was an artist of equal stature. His purpose was to blend the Byzantine tradition with the requirement for
Hellenocentric modernism. In that sense, Kontoglou had a decisive impact on what is often called the `generation of the Thirties`.

The `generation of the Thirties` was the most cohesive group ever to appear in Greek art, and some of its representatives were active abroad as well as in Greece. Among its members were Nikos Ghikas (1906-1995), Yannis Tsarouchis (1910-1989), Diamantis Diamantopoulos (1914-1996), Nikos Engonopoulos (1910-1985), Yorgos Mavroidis (b. 1913), Yannis Moralis (b. 1914) and Nikos Nikolaou (1909-1986). This generation of artists – whose most characteristic representative was perhaps Yannis Tsarouchis – combined vernacular and `art` elements, the two-dimensional painting of Matisse, and the Karaghiozis shadow theatre and the world it represented.

The `generation of the Thirties` was, in fact, most active after the Second World War; its teachers were Parthenis and Kontoglou, and also the vernacular painter Theophilos (1867-1934), the Greek equivalent of the naif painter Douanier Rousseau. The central concern of the generation of the Thirties was `Greekness`: an inquiry similar to that being conducted at the same time by the Italians into Italianita and by the Spanish into Hispanidad. `Greekness` could be defined as a belated desire to exploit antiquity, a kind of localised, flaccid Renaissance, or a form of neo-Classisicm lingering on, in blissful ignorance, into the twentieth century.

The cultural policy of Greece took the form, in the visual arts, of a pavilion at the Venice Biennale and of uninterrupted participation in that institution after 1934. In 1938, while the dictatorships in Greece and Italy were at their height, Parthenis, Michalis Tombros and Angelos Theodoropoulos were sent to Venice to represent their country.

In 1930, the School of Fine Arts was elevated to university level and reorganised under the directorship of the sculptor Constantinos Dimitriadis, creator of the popular Discobulos which stands outside the Panathenaic Stadium. Dimitriadis was also the first president of the new Association of Greek Artists, which was founded in 1937; this body enjoyed the favour of the official state and stood at the opposite end of the spectrum to the avant-garde Art Group.

In 1945, with the assistance of the French government, a large group of young creative artists whose ideological orientation was progressive (K. Koulentianos, Ianis Xenakis and others) were able to leave en masse for Paris in order to avoid the consequences of the Civil War in Greece. Since that time, there has always been a Greek cultural community in Paris, and it has had an extremely positive impact on the artistic production of Greece itself. The first members of the community were soon followed by the internationally-famous sculptor Takis (b. 1925), who created pioneering works called `Signals` and `telemagnetic sculptures`. In 1959, he presented a series of works called Antigravity at the Paris gallery run by its Greek owner Iris Clair.

The Sixties were a time of intense turmoil in the visual arts. In 1960, the Greek representative at the Venice Biennale was Yannis Spyropoulos (1912-1990), whose Oracle was awarded the UNESCO prize. After that time, Spyropoulos exhibited at some of the world`s greatest museums, establishing himself as the most eminent Greek representative of abstract art. In 1964, three young artists presented their Proposals for a New Greek Sculpture at the La Fenice Theatre in Venice; they were Vlasis Kaniaris, Nikos Kessanlis and Daniil Panagopoulos. Kaniaris developed intense socio-political concerns which were reflected in his Gastarbeiter-Fremdarbeiter series, and in 1996-97 he was selected honoris causa for the `Face a la histoire` exhibition at the Pompidou Centre in Paris. Kessanlis was an active membFer of the New Realism movement and of MecArt. Other artists studied in Berlin on DAAD scholarships (Costas Tsoclis, Alexandros Akrithakis, Jannis Psychopedis, S. Logothetis) and in America as Fulbright (Costas Varotsos) or Ford (Thodoros, N. Theophylaktopoulos, D. Kokkinidis) scholars. In the case of the United States, some of the leading members of the Modernist movement were artists of Greek descent: Loukas Samaras (b. 1936), Chryssa (b. 1933), Thodoros Stamos (1922-1997), and others.

The fall of the junta (1974), marked the restoration of democracy and Greece`s accession to the European Union (1981). It established an atmosphere of communication and international exchange which influenced the visual arts. As far back as the Seventies, the gallery-owner and collector Alexandros Iolas had built an artistic bridge between Athens, Milan, Paris and New York – a role in which he was succeeded, during the 1990s, by the collector Dakis Ioannou, President of the DESTE Foundation and of the International Council of the Guggenheim Foundation.

The Ioannou collection, which concentrates on American art, has been exhibited – and enthusiastically received – at major museums around the world. DESTE also provides material for original exhibitions such as Natural Geometry and Post Human. Since the Eighties, the island of Andros has been the home of the Goulandris Museum of Contemporary Art, which has held retrospective exhibitions of work by Kandinsky, Klee, Giacometti, etc. In 1985, Athens inaugurated the annual institution of the Cultural Capital of Europe, and was followed in 1997 by Thessaloniki.

In that year, the Greek artist Alexandros Psychoulis (b. 1966) won the Benese Prize at the Venice Biennale for his work Black Box, which combines computer technology with the video wall. It is clear that despite the absence of any art funding (Athens lacks a Museum of Modern Art, Greece is making its mark on the international art scene. It deserves equal recognition.

Costas Tsoclis (1930) presented his Video-portraits in the 1986 Venice Biennale. He combined the traditional rendering with the technological movement. In 1990 in the same forum, the younger sculptors Yiorgos Lappas and Yiannis Bouteas took part. They were both invited by the Berlin Metropolis group show, and to the Cultural Capital of Europe, Dublin. In 1993, sculptor George Zongolopoulos (b. 1903), (whose first participation at the Venice Biennale was way back in 1946), installed an imposing hydraulic structure outside the Greek pavilion.

Titled “Umbrellas” it was 10 metres high. The same artist successfully participated in the 1995 and 1997 Biennale, In the 1995 Biennale the official representative of Greece was Takis, who introduced a trend in sculpture by using electromagnets, mobile elements and flushing bulbs. The Mus`e Jeu de Paume of Paris, also exhibited Takis.
Yiannis Kounellis (b.1936) installed on board the ship IONION, docked at the port of Piraeus, in 1994. This exhibition was a major artistic event that influenced Greece`s avant-garde. Greek figurative painters, such as P. Tetsis, D. Mytaras, Alecos Fassianos and Chr. Carras had frequent shows in Europe and in the U. S. (Mytaras shows even in Tokyo).
Since 1993, the Association of Owners of Greek Galleries has organized the annual ART-ATHINA fair, where all Greek Galleries, (as well as some foreign ones), show contemporary visual art. This forum has proved very successful, replacing the “Panellinies” fair.
The National Gallery in Athens, showcased the famous Costakis Collection in 95/96. It contains some of the most important works of the Russian avant-garde.
Finally throughout 1997, during which Thessaloniki was the host of the “Cultural Capital of Europe”, a number of impressive retrospective exhibitions was held of works by progressive representatives of the 60`s, like Nikos (Kessanlis), C. Xenakis, Pavlos, Daniil etc.